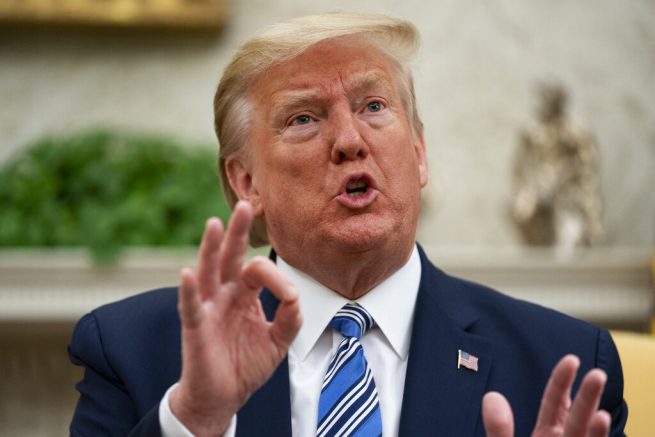 President Donald Trump speaks during a meeting with Gov. Ron DeSantis, R-Fla., on the coronavirus response, in the Oval Office of the White House, Tuesday, April 28, 2020, in Washington. (AP Photo/Evan Vucci)

President Trump said special considerations need to be made if states seek funding to bail out their economies.

While speaking in the Oval Office on Tuesday, the president said a state that needs money should only receive funding if the hardship was caused by the coronavirus. He said there’s a big difference between a state that lost revenue because of the pandemic and one that was “mismanaged for 25 years.”

President Trump also stated there would need to be discussions about state policies before any economic relief would be doled out and mentioned sanctuary city policies specifically as a point of contention.

“I think sanctuary cities is something has to be brought up, where people that are criminals are protected,” he explained. “They’re protected from prosecution…I think that’s one of the problems that the states have.”

The president added that he’s “not looking to do a bailout for a state that’s been unfair to many others, while most of the states have done such a good job.”