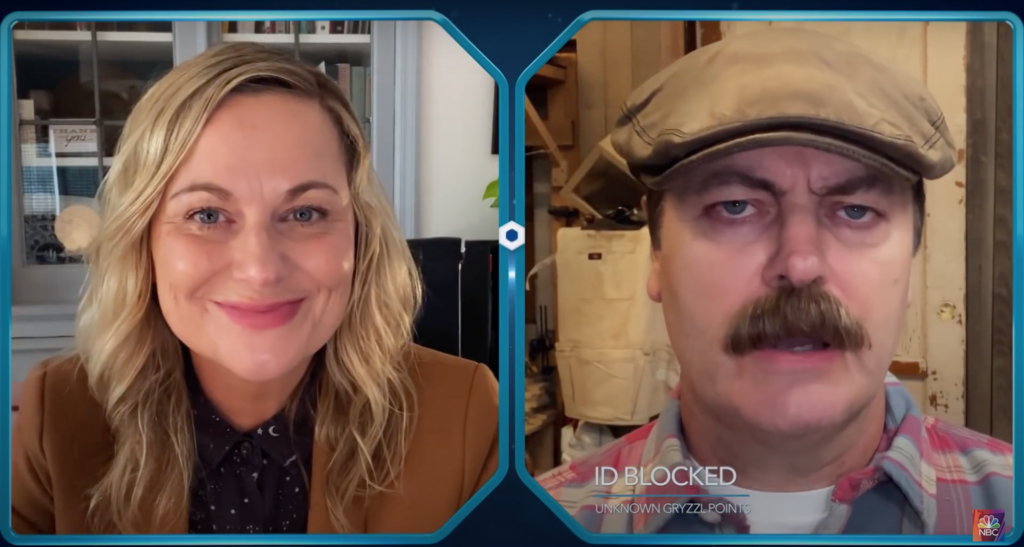 You’d think social distancing would render sitcom production all but impossible, but NBC found a workaround this week. The network aired a new episode of “Parks and Recreation” on Thursday, so low budget it looked pretty much like any half-hour Zoom call. And why not?

The aesthetics of video conferencing dominate just about every channel these days, but applying the style to such a popular fictional universe was a bold move. Still, Pawnee has no special immunity from global pandemics, so it figures the “Parks and Rec” gang would be relying on the same software as the rest of us. Even Ron Swanson.

The suspension of disbelief did not come easily at first. Leslie and Ben’s initial scene really felt like footage from a virtual table read between Amy Poehler and Adam Scott. The lack of production made the transformation process fascinatingly unconvincing.

The blue framing helped, as did the episode’s use of ads and talkshow segments. But as the plot warmed up, following the gang through a coronavirus phone tree check-in process, the beats were smoother, the acting was better, and the whole thing was more believable. They were back.

Of course, it didn’t all make sense. The script involved a lot of catching up between people who were supposedly talking to each other every day, clearly to show the audience what the characters were up to years after the show ended. Their 2020 lives all pretty much made sense, allowing for a surprisingly smooth flow from the finale to today. Some blocks were choppy. But, wow, was it good to see Joan Callamezzo. And Tom Haverford!

Aziz Ansari, as it turns out, was never really canceled. At least not permanently. His 2019 Netflix special was popular but polarizing. NBC’s decision to rightfully include him in the reunion on Thursday made for an odd contrast with biggest news of the 2020 election that day: the allegation of sexual assault against Joe Biden. The truth ultimately won out in Ansari’s case. On Biden, we may never even know what the truth is.

Ansari is one of many “Parks and Rec” stars whose careers were boosted or revitalized by the show, one of its most important legacies. It was striking, for instance, to see Chris Pratt, one of the world’s biggest movie stars, back in action as Andy Dwyer. And Burt Macklin. Megan Mullally’s cameo was predictable, but perfect.

All in all, it was good fun. “Parks and Rec” started to grate on me as the seasons went on, but Thursday’s episode captured the group’s dynamics at their most entertaining—lighthearted, tender, and sharply funny. Critically, the reunion didn’t try to do too much. It didn’t try to advance serious storylines or cover sweeping ground to make up for lost time. It was short and sweet. It was perfect for what it was, an uplifting fundraiser that reunited a silly and iconic sitcom family. But that’s not all good news.

The “Parks and Rec” experiment was really interesting. It’s just not much of a solution to TV’s pandemic-era production woes. The reunion worked because of its conservative ambitions. It may seem like an obvious point that television shows can’t switch to web-conferencing mode for full seasons, but the whiplash-inducing screen swaps, necessarily choppy transitions, and limited interactions and mobility will make it exceedingly hard even for shows to walk viewers through compelling arcs. More than 30 minutes of the format would be exhausting, let alone week after week.

That isn’t to say one show might figure the formula out. With the whole country experiencing some level of stay-at-home orders, someone smart might find a way to make resonate television art. But fun as it was, “Parks and Rec’s” reunion underscored the challenges this pandemic poses to the entertainment industry and viewers, at least for the months ahead.