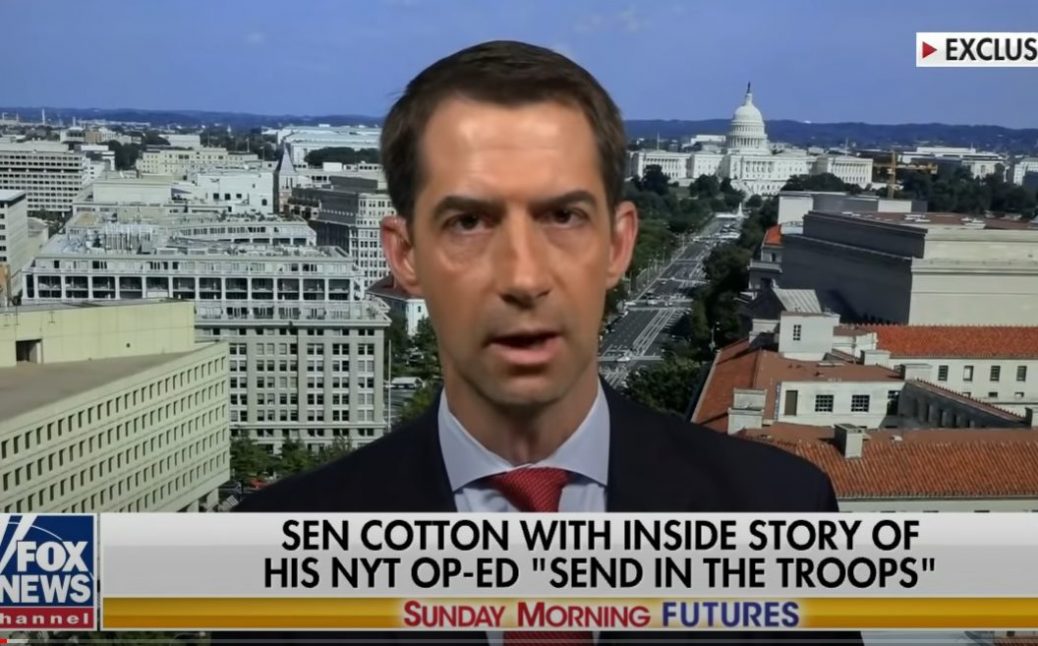 Twitter tried to give Arkansas Republican Sen. Tom Cotton the boot after the senator and combat veteran went on cable television to advocate the use of the federal military to quell violent riots engulfing the nation.

“First on television, then on Twitter, I noted that the National Guard and active-duty troops could be called out to support local police if necessary, as happened during the 1992 Los Angeles riots,” Cotton wrote in a Fox News op-ed Tuesday. “‘No quarter for insurrectionists, anarchists, rioters, and looters,’ I wrote.”

Twitter however, Cotton said, took “no quarter” to mean “no prisoners.” In other words, Twitter tried to claim Cotton was calling on the U.S. military to shoot citizen protestors.

“Never mind that the phrase today is a common metaphor for a tough or merely unkind approach to a situation,” Cotton wrote.

For instance, former Democratic presidential candidate Pete Buttigieg and The New York Times have used the phrase in this way. Or that politics often employs the language of combat as metaphors: campaigns, battleground states, target races, air war and ground war, and so forth. And, of course, the exaggerated foolishness that I was literally calling for the arrest and summary execution of American citizens.

Cotton explained that when the senator’s staff tried to reason with the tech giant, the company only put forward a low-level employee and demanded the Arkansas Republican delete the tweet in question in thirty minutes or lose control of the account while avoiding the creation of any paper trail during the process. After Cotton called their bluff, Twitter backed down and told the senator it would take no action.

Twitter’s attempt to de-platform Cotton comes merely two weeks after the New York Times apologized and ousted an opinion editor for publishing an op-ed from Cotton urging the president to “Send In The Troops” over the riots. Times employees aired their grievances over Cotton’s piece publicly on Twitter collectively writing “Running this puts Black @nytimes staffers in danger,” forcing the legacy paper to cower to its internal woke elites.

Just days later however, the Times ran a piece that called for the total abolition of police.

“You do have left-wing thought police not only in the New York Times newsroom and in Twitter, but throughout journalism and increasingly at businesses and in policies as well, who were raised in social justice seminars and they think they’re entitled to be protected from any opinion they don’t like,” Cotton said on a Wednesday appearance of Fox and Friends, and went on to reference this week’s failed attempt by NBC News to de-platform The Federalist by colluding with a foreign entity to demonetize the website’s Google ads.